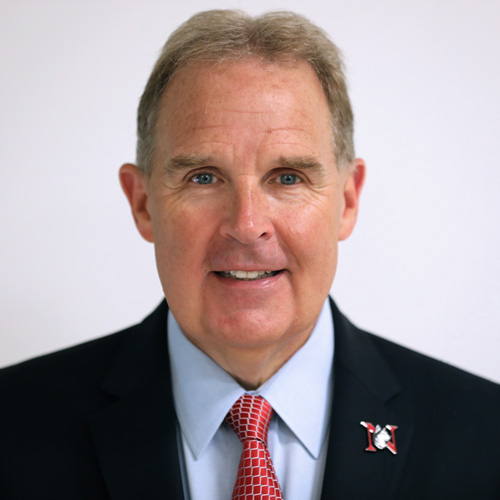 Director of Athletics and Recreation

Jim Madigan serves as the director of athletics and recreation at Northeastern University. Prior to leading the athletics department, Madigan was named Northeastern men’s hockey’s 10th head coach in program history on July 26, 2011. During his tenure, he helped lead Northeastern to back-to-back-to-back Beanpot championships, two Hockey East titles, three NCAA appearances, and the first Hobey Baker Award winner and Mike Richter Award winner in program history. He has seen 20 of his players drafted by NHL teams.

Madigan brings more than 35 years of college and professional athletics experience to his post on Huntington Avenue. He played for the Huskies from 1981 to 1985 and was an assistant coach at the university from 1986 to 1993. He served as a professional scout for the New York Islanders and Pittsburgh Penguins from 1993 to 2011, winning a Stanley Cup in 2009.

Madigan’s appointment as head coach continues an over three-decades-long tenure at Northeastern. His service to the university includes roles as men’s ice hockey assistant coach (1986-93), assistant director of physical plant services (1993-99), director of athletic development (1999-2004) and associate dean and director of development in D’Amore-McKim School of Business (2004-11).